Help for the bereaved

The word “bereavement” derives from an Old English term meaning “deprival”. The bereavement that is starting for you has deprived you of a loved one, and pain is the inevitable result. The person who has just passed leaves a huge void in the family. Once the funeral is over, it is very likely that, sooner or later, you as a bereaved person will be alone with your grief.

Those around you will have returned to normal life well before your own life has stabilized. With time, your need to talk about your loss may find no one left to listen.  As one moves through the mourning process, one sometimes feels like healing will never come. It then becomes very important to seek out human comfort and warmth for support in this difficult period of our life.

Every pain is unique

Since each human being is different, you will have your own way of experiencing your pain. You have to be indulgentwith yourself, live one moment at a time, and not miss an opportunity to congratulate yourself on your courage.

Most specialists say that a major mourning period can last between nine months and two years. But those figures are only approximate indicators: you will be in mourning as long as you need to be.

At certain stages of mourning, the bereaved person may feel the need to be alone to take stock of things.  At other times, he or she may feel an acute need to be listened to, consoled and supported. You have to respect your own needs, which will be sure to change as the months go by.

To help you through your mourning period, the Coopérative funéraire de l’Outaouais makes certain support services available to you.

Following a death, you will receive free of charge, at regular intervals, the four instalments in the “By Your Side” series, dealing with the various stages of mourning. These are described in greater detail below. You will also have access to the La Gentiane site at www.lagentiane.org.

In addition, you can take advantage of Entraide-Deuil de l’Outaouais(819 770-4814), which offers you the possibility of participating in support groups, or call upon the completely voluntary services of Sister Denise Savard, S.C.O. (819-776-3127).

Sister Denise Savard, of the Sisters of Charity of Ottawa (S.C.O.), will offer her services as a volunteer to guide you through your bereavement. All you need do is call her at 819-776-3127 to set up an appointment. 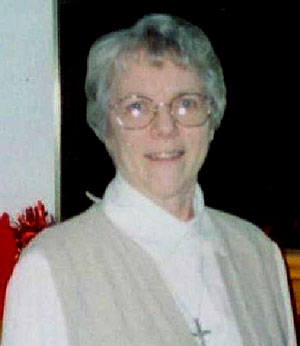 After many years spent teaching young adults, Sister Savard made herself available to the diocese of Mont-Laurier. Initially a chancellor for about 20 years, she later worked at the same time for the Tribunal ecclésiastique as a counselor for persons desiring a declaration of nullity of marriage.

To better prepare herself to support bereaved persons, Sister Savard attended an 11-week session with Entraide-Deuil de l’Outaouais. She is well qualified to meet a variety of community needs, since she has a bachelor’s and a Master of Education degree from Université Laval in Quebec City, a B.A. from the Université de Montréal, and a bachelor’s degree, a Licentiate and a Master of Canon Law from Saint Paul University in Ottawa.

Sister Savard is fully equipped for the job, and happy to place her talents, her warmth, her ear and her heart at the service of the bereaved persons she will be guiding. To them her door is wide open.

A tool for support in bereavement offered exclusively by funeral cooperatives

Losing a family member is probably the most difficult trial we will face in life. Those who have experienced this know how important it is to feel support from others in order to get through the upheavals of a bereavement.

The people who work in funeral cooperatives have daily experience of death and bereavement. They know the emotions that can well up weeks after the loss of a family member.  For that reason, the funeral cooperatives have prepared a series of four instalments called By Your Sidein order to continue our support for bereaved families, even beyond the period of the funeral rites.

The four instalments in this series are sent free of charge to persons who have paid for funeral services for a family member from a participating funeral cooperative. They are sent in the first year – one every four months.