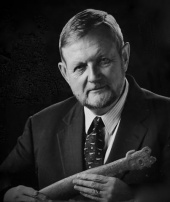 George F MacDonald, PhD, CM of Cantley, Quebec died peacefully with his children after a long illness on Jan 22nd 2020. He is survived by his children, Grant MacDonald of Cantley, Quebec, Christine MacDonald Doherty of Amherst, New Hampshire and granddaughter Celeste Doherty of Ottawa, Ontario. He lost his beloved high school sweetheart and wife of 58 years, Joanne MacDonald in 2018. He is survived by his sister Glena Will and brother in law Bruce Will and their children and sister in law Sharon Allison and her children.

George MacDonald was a renowned museologist, archeologist and anthropologist. He was Director emeritus and former president and CEO of the Canadian Museum of Civilization (now the Canadian Museum of History), he played a key role in the conception and development of this world-class institution, known for its collections and cutting-edge ideas. He has also highlighted the exceptional contributions of Aboriginal people to Canadian identity and culture.

He was driven by curiosity and was a Yale trained academic who had a gift for connecting with people from all cultures.  He not only listened to people, he genuinely heard what they had to say. He considered himself an anti-colonist and traveled the world with his “partner in crime” and fellow anthropologist, Joanne. They were a couple of real-life Indiana Jones who survived a near plane crash in Spain, being held hostage at gunpoint in India, a major earthquake in Guatemala, trading plane tickets off a plane that fatally crashed, and a shipwreck and miracle rescue in British Columbia that it made news across North America.

He walked where there was no path and left a trail. He will be missed by his family and many friends across the globe.

Write your sympathies or tribute

To all the family

My sincere sympathy to you all, what a great man and how great to read all of this.