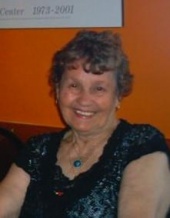 The children of Eva Desjardins-Parent regret to inform you of the passing of their mother on February 5, 2021 at the CHSLD La Vigi, Gatineau, Québec, at the age of 96 years. She was predeceased by two husbands: Isidore Bertrand (2015) and Lucien Parent (1997) as well as by one son Dicky Bertrand (2009) (Sandra Kluke).

Adored grandmother of 20 grandchildren as well as 7 great grand children.

One brother Donat Desjardins (Hugette Plouffe) survives her. She was predeceased by 5 brothers and 8 sisters.

She leaves behind many friends at the Royal Canadian Legion, Local 58 in Pointe-Gatineau where she served in the Ladies Auxiliary for many years.

The burial of ashes will take place at St. Elizabeth of Hungary’s cemetery in Vinton, Québec, later in the year.

Write your sympathies or tribute