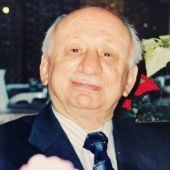 It is with sadness that we announce the passing of

Deceased on Friday November 1, 2019 at the Hull hospital at the age of 88 after a long battle with health issues. Beloved husband of Gity Ghatan, father of Ardavan and Arghavan, brother of Manucher, Syrous and Maheen, grandfather of Ariana, Kian and Dariya. Father-in-law to Monique and Anthony.

We would like to thank to the doctors, nurses and the support staff at the Hull hospital, the CLSC nurses and staff, as well as Aidexpress for their support and care they provided him during his illness.

He was a professor of Mechanical and Agricultural Engineering at Pahlavi and Jondi Shapour universities in Iran before the Iranian revolution. In later years after the revolution he switched his interest to business and enjoyed it immensely. His love for life and family was expressed by gathering everyone around and sharing his home and food - something I have taken note of and practice in my own life. He particularly loved his grandkids and his wife and was so proud of them. We are going to miss his smile and zest for life for ever.

We love you Baba.